Starting Point: Comillas (20 metres), starting in the Town Hall, situated in the city centre, take the street, Paseo Antonio Garelli, towards the beach.

Length and estimated walk time: 5 kilometres.; an hour and a half without stopping.

Difficulty: slight, even though in the winter there may be mud due to wet weather.

Cycling possibility: you can do this route by bicycle except for the stretch between the harbour and the cape Punta de la Moria. 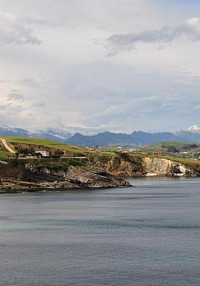 Town Hall (20 metres): Follow the street Antonio Garelli towards the beach, which is busy and noisy during the summer.

The beach of Comillas (5 metres) (0.7km): carry on along the coast; you will pass in front of the fishermen’s facilities in order to get to the harbour.

Harbour (3 metres) (1.1 km): It consists of a small cove that houses the few vessels, which still keep their fishing tradition. Continue straight ahead uphill through the rock-carved stairs that end in the breakwater that overlooks the sea. Head to your left, cross over the esplanade to take the small path, then take the right hand fork, continue and you will come to the end of the track, where is a green-coloured cape that goes down to the blue sea.

Punta la Moira (20 metres)(1.6 km)(30′): here you will enjoy the wonderful views of the sea. If you look west you will see the cape Oyambre and the Picos de Europa. On the East is the cape Miradorio, outstanding for its faults and the steep-cliff coast. Once you have admired all this beauty you are ready to return, follow the path until you get to the crossroad where you turned before, and go up the road towards the statue of an angel that rests on the ruins.

Cemetery (25 metres) (1.9 km): those Gothic ruins were once the church, but became the cemetery, which is protected by the Guardian angel, sculpted by Jose Llimona. At your left hand side there is a roundabout, you have to go straight ahead and take the right hand fork, which is the coastal access to Trasvía. You should follow the road and turn left when the path becomes a track. It leads to the University. If you follow it you will go under an arch, cross it and you will be facing an abandoned building.

Seaweed warehouse (70 metres) (3 km): The dimensions of this building give us an idea of how important the seaweed collection used to be for food and the production of medicines. Turn right on the first crossroad and left on the second, you will come across oak trees and laurels. When you get to the road where you will find a group of houses. There turn left, you will leave behind the abandoned sports facilities to finally reach a huge neo-Gothic construction.

Pontifical University (80 metres) (4 km): This is another distinguished spot in the village. Although it used to be a seminary for the last few years, it was closed for a time but now is to become an ambitious college of the Spanish Language. If you descend the hill you get to the main entrance arch, where you should turn left to take the Road Manuel Noriega towards the roundabout Doctor Santiago García Castellón. Turn left at the roundabout and you will descend through the road Paeso de Solatorre, where another majestic building is located.

Sobrellano Palace (35 metres): This neo-Gothic building was the house of the first Marquis of Comillas, Antonio López, and next to it are the chapel-mausoleum and the outstanding building designed by the Catalan artist Gaudí, Known as El Capricho de Gaudí, which was refurbished as a restaurant a few years ago. Once outside this majestic building, turn right onto the road Gaudí in order to return to the starting point.