Comillas is without any doubt, one of the most beautiful and best Known villages in Cantabria. Surrounded by an extraordinary natural landscape it contains a majestic architectural collection.

The municipality is composed of other neighbourhoods less well-Known than the urban area, but also full of many interesting attractions.The village rests on a broken coastline bathed by the ocean and the beauty of places such as the La Rabia lagoon, framed by the snow-capped Picos de Europa which is absolutely spellbinding

The shape of Comillas was altered by emigrants returning from America who introduced the Catalan Modernismo in the nineteen century. This picturesque architecture is displayed on its neo-Gothic, neo-Arab and neo-Mudejar constructions, an outstanding collection renowned for its exceptional beauty within the region.For example, the ancient Gothic church which stands in the beautiful cemetery and was declared a Site of Cultural Interest. 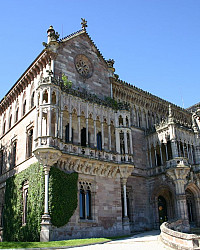 Throughout the Middle Ages, Comillas was a small village that lived off its fishing port, cattle and agriculture. Situated in the West Coast of Cantabria it was soon taken over by the Marquises of Santillana, with whom the townsfolk had many arguments.At the end of the nineteen century, Comillas started changing its shape thanks to the distinguished Don Antonio López y López who emigrated to America and cameback to Barcelona wherehe foundedimportant navaland tobaccocompanies. He was given the marquisate of Comillas in gratitude for his help duringthe Cuban conflict.The Marquis begun two great projects in Sobrellano, but died before the palace or the chapel-mausoleum were finished. His son Claudio also maintained good relations with the Crown and spent most of his fortune on charity projects. Specially the Pontifical University which he founded and offered it to the Pope who bestowed upon it the Pontifical title. From then on it was run by Jesuits. At the end of the nineteen century Comillas, as well as Santander, had become one of the most distinguished summer resorts in the North of Spain.

From then onwards Comillas kept on flourishing. The Marquis invited the King Alfonso XII, who enjoyed spending his summer holidays in four houses specially fitted out for Royalty.The most significant festivity Comillas has ever Known were the summer holidays the King Alfonso XII spent in the nineteen century. As a result many noblemen and well-endowed people chose the village to spend their vacations, attracted by the wonderful beaches where they took to the sea in old-fashioned bathing suits. Nowadays, those beaches attract many tourists, also captivated by the marvellously clean beaches, secluded coves and the beauty of the landscape that make Comillas one of the most attractive coastal villages in Spain.In the summer, the activity of the beaches extends to the urban area, where everyone can enjoy the wonderful atmosphere.