This route helps you discover the most distinguished spots in the municipality. Most of them are part of Oyambre’s natural reserve. 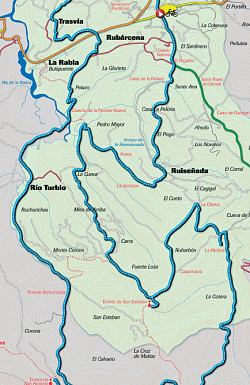 Difficulty: low, it consists of gentle gradients and good tracks except for several stretches, which may be covered with mud. Gradients are steeper for the part that connects Rio del Mato with La Molina (km 18.60 a 8.80), as well as for the part that descends from El Pisgu to El Riguero (km 30,70 a 31,10). Apart from that, there are tarmac byways in urban areas and roads with little traffic.

Cycling possibility: as it has been said, it is possible to do this route on a mountain bike. There are 11.10 kilometres of tarmac roads. A total of 34.3 kilometers divided into 5 stretches, and 2.76 kilometres of wide tracks divided likewise into 3 stretches, which make up 8.5 per cent in all.

Comillas’s municipal building (km 0) (20 metres): from the town centre take the road towards the beach. On your way you will find a sharp gradient to your left that takes you to an interesting Gothic construction.

Comillas’s cemetery (km 0.62) (25 metres): this consists of a walled construction that once was the town’s church. High up on one wall you will see the unmistakable statue of the Guardian angel, sculpted by Llimona. Turn right towards a roundabout. When you get there follow the roundabout until you come to the exit along the coast, then go uphill to Trasvía. Keep on the main road, passing the University and you will get to a building that once was the seaweed warehouse. Continue straight on and eventually you come up on a tarmac road near the hamlet of Trasvía, from where you will be able to see Oyambre.

Trasvía (Km 2.84) (60 metres) (15′): keep going left and you will reach a junction where there is a hotel. Pass the hotel and go downhill to your left. You will see the football ground beneath you. Cross the main road and you will be in a new district of recently built houses.

Rubárcena (Km 4.08) (35 metres): near the bus shelter there is a byway uphill that soon leads to an unsurfaced path. Follow it, you will get to a slope that faces west, which is connected to the road to Rioturbio, which passes near a small shrine and gets to the bridge that crosses the marshland.

The la Rabia lagoon (km 5.91) (3 metres): the flat road that crosses the marshland ends in the scattered hamlet of Rioturbio, which displays a fine collection of traditional houses.

Rioturbio (Km 7,21) (10 metres) (35′): You will cross the village centre and suddenly the tarmac road becomes a track. It is a gentle gradient that runs near the right bank of the river Rio Turbio. The track deepens gradually into the forest. After a climb to the left you will cross a small stream.

Bridge Bichurichas (Km 9.71) (40 metres): this is a bridge situated amongst oak trees. Go uphill through a track that becomes steeper when it gets into the woods of oak trees, beeches, chestnuts, holly trees, hazels, birches, etc. After climbing for a while you will come across a leisure area and a junction.

Turning for the hermitage of San Antonio (Km 11.76) (200 metres): at the junction take the right hand fork that descends gradually. Ignore the first exit to Caviedes and you will reach a beautiful spot where is a building made of sandstone.

Hermitage of San Antonio (Km 12,32) (185 metres) (1h. 20′): it is situated in a slope that faces west and it is surrounded by a leisure area. If you return to take the same path, you will keep on climbing to your right until you get to a junction where you should fork left. Cross over a small valley and you will reach a spot where there are tables as well as sculptures.

Viewpoint los Pintores Montañeses (Km 14.39) (245 metres): this viewpoint was constructed in honour of all the painters in Cantabria. This spellbinding spot is the best viewpoint to sight the oak trees in the forest, which are not usually found so close to the sea. The track continues uphill and ends in a big field near a cabin and a big watchtower

Turning for Ruiseñada (Km 15.65) (250 metres): now you are descending towards a spot where the landscape is dominated by oak trees and chestnuts, but which is less extensive than the wood near the stream Rio Turbio. You will come to a replanted area, full of interesting species such as eucalyptus and pines characterised by their rapid growth. You will eventually get to the base of the forest where you will have to cross a bridge.

Río del Mato (Km 18,30) (63 metres): the valley is characterised by its karst features where the waters flow underground. Cross another bridge and continue uphill through a sharp gradient that becomes gentler as it joins the tarmac road to the left, which in turn leads to a new suburb.

La Molina (Km 19,28) (110 metres): ride past this suburb but do not enter it. When you get to a small shrine turn right, cross the riverbed and climb the slope in order to reach the next group of houses.

La Citrera (km 19t96) (90 metres) (2h.): just before the ancient school there are two turnings to your right. Take the first concrete road. There is a gradient that becomes easier as it passes between the meadows, and then you will come to a junction where you should keep to the left near the eucalyptus. Ignore secondary paths and when you come to a bigger junction take the left turning. After a plain stretch there is another crossroad. Turn right at the crossroad and immediately you will reach the hermitage on the slope.

Hermitage of San Esteban (Km 22.59) (251 metres) (2 h. 20′): This emblematic spot of Monte Corona offers you beautiful sights of the western coast. Besides, it is surrounded by several leisure areas. Return to the crossroads, take the path to the left towards La Citrera, but this time fork left on the following junction and descend through the extensive wood of eucalyptus. Ignore several secondary paths until you get to a bigger junction where you should keep right towards a plain near the marshland.

Ría de la Rabia (Km 26.87) (10 metres) (2h. 35′): before you reach the edge of the marshlands take the right track. It is a sharp climb that becomes easier as it passes the meadows. It will take you to a new suburb located on the top of a slope.

Araos (Km 27.71) (85 m): once you have reached the tarmac byway, climb the slope between the houses, which will take you to another suburb part of Ruiseñada.

La Ventuca (Km 28.33) (85 metres): If you ignore all the secondary turnings you will easily get to a group of houses. Keep on the main road until you get to the byway that runs near the base of the valley.

Ruiseñada (Km 29,17) (40 metres) (2h. 50′): When you get to this junction, turn left to leave behind the majestic church of San Adrián. You will descend between houses. Fork right to leave the main road.

Turning for El Pisgu (Km 29.57) (25 metres): immediately cross the river Ensenada. It is a beautiful stretch which meanders between alders. Start to climb through a narrow byway between trees. You will pass by a spring called El Pisgu to get to a house and an interesting hermitage.

El Pisgu (Km 30.46) (60 metres): It is located beside the hermitage dedicated to the Sacred Heart. Leave the tarmac road to take a wide byway between bushes, ignoring the immediate tarmac road to the left. You will come to a gentle descent and then a steep climb, which you may find muddy. Continue uphill to your right towards Ruiseñada. After a sharp bend you come to the main road that leads to Comillas.

El Riguero (Km 31.53) (35 metres): now you just have to follow the main road amongst the houses to reach your starting point.